That time we hung out with Google...

There have been a few moments in our lives when Morgan and I have looked at each other and said, “HOLY SHIT!“ (in a good way, don't worry):

In the delivery room.

After our first National Stationery Show.

As we opened the door of our flagship store for the first time.

And most recently, this past month as Google swept us up in a #dreamlife tornado, showering us with opportunity and holding a giant megaphone to our story.

We’re settling back into reality now, recovering from the week-long film shoot; from spending five days in New York City to celebrate Pride with the Grow With Google and Creative Lab teams; from making a 5-color letterpress poster to commemorate the New York debut of the film; from hustling and not stopping and giving our all and having all the positivity we put out into the world coming back to us in repeated whacks to the face. We feel like we've just thrown a second wedding; our feet are killing us but our faces are still glowing from such an awe-inspiring spectacle. 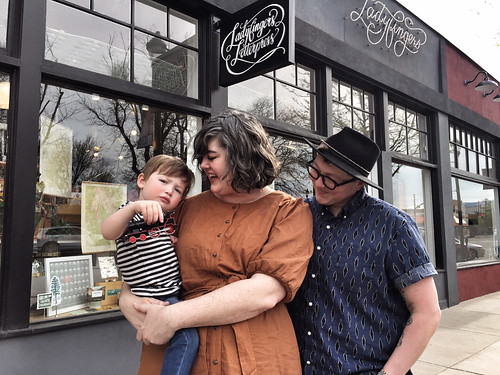 We received an email from a casting director in New York, hoping to set up a chat with us and the folks at #growwithgoogle for their upcoming video campaign. We agreed to speak with them, knowing that the conversation would probably end up nowhere since after all, why would Google want to feature little old us? Out of all the amazing stories you hear about outstanding individuals leading extraordinary lives, why would they choose us? We go to work, pick up our toddler from daycare, make dinner and look at our phones in bed until we fall asleep. Surely there are more interesting stories out there besides ours, right? (Oh, did I forget the part about making inclusive paper goods for the underserved LGBTQ population? And, like, the part about following your heart even though it’s scary? OK, so there was that. In addition to toddler pick-up, which is also quite important, apparently.)

You can imagine our sheer surprise when we got the email confirming that we had been chosen for the campaign. “HOLY SHIT,” we uttered as we looked around and suddenly realized we needed to clean the studio. The 20-person film crews from LA and NY would be arriving in a few short weeks so we scheduled haircuts, organized the shop as best as we could, and tried to get as much work done knowing that we’d basically be out of commission for about a week. We couldn’t believe that out of the gajillion LGBTQ-owned small businesses that exist in this world, Google would choose to tell our story for Pride month. But here we were, making sure we had enough toilet paper for people we’d never met in-person but who thought our story was worth sharing with the masses. We wondered what our future would hold after this whole thing was said and done, but the only thing we were sure of was that we had enough toilet paper.

The first to land in Colorado Springs was the legendary production team from Moxie Pictures. We showed them around, not sure if we should play it cool or expose that we were actually FREAKING TF OUT inside. Luckily, they were super chill and we became instant friends for life, so we had that going for us, which was nice. We eventually met the remainder of the team as they trickled into COS, including our future BFFs Lorraine Yurshansky and Bridget Prophet from Google. We sat in on their production meeting and went over the shot list for the next few days. We were really doing this! It was actually happening! And they brought SNACKS (and toilet paper, which we now had an abundance of).

The next few days flew by in a fever of laughter, honest conversations and catered lunches (I know, poor us!). We nailed a 3 hour interview (JK!!! we felt like zombies and our brains just stopped working after awhile); went on a hike through Garden of the Gods with the entire film crew; held a design meeting with our fave local LGBTQ nonprofit Inside/Out; staged a musical performance with the members of Arley’s B-52s cover band and taught a hand-lettering class; drew some stuff, printed some stuff and learned how to say “Copy that!” when replying to someone on set.

We followed the calm and comfortable lead of Moxie Pictures director Henry Lu, who was able to harvest the golden nuggets of our story through an expertly framed interview. It was during this series of questioning when we were struck with the weight of our life’s experiences. We never anticipated all the little things that we’ve ever accomplished could come together and form a cohesive story worth sharing with millions of people. Henry, Bridget and Lorraine somehow saw us in a way we couldn’t even see ourselves and their eagerness to document our story was a testament to the hustle we’ve believed in for the past 8 years as Ladyfingers Letterpress. The real golden nugget of it all was not the stories that we gave to Google, but the values we rediscovered in those recollected stories. It made us realize we’ve been digging in the dirt for so long that we haven’t had the time to look up to see the beautiful garden that had grown up around us. It was almost as if they had held up a giant mirror that showed us that the work we’re doing has been and always will be necessary; and that hard work, inclusion, and a commitment to your ideals will always paint a road towards opportunity. And in our case, define our concept of success.

Between filming scenes of Morgan cutting giant stacks of paper like a hot knife through butter and Arley drawing in reverse on a storefront window, Lorraine mentioned that it might be fun to teach a hand-lettering class at Google! In New York! And we should come to the Google Pride event they’re hosting at the end of June! And we should write a blog post for the Google Blog! And then we should also make a letterpress poster to commemorate the launch of the video! Holy shit! (Again!) They gave us a little bit of creative direction, including, “Make it colorful! For Pride!” So colorful it was. I’m pretty sure it was the first 5-COLOR LETTERPRESS PRINT we’ve ever designed, and if you know anything about letterpress, you’ll know that 5 colors are a F*CK TON of colors! But when Google asks for colorful, you give Google colorful! We booked tickets to New York and eagerly awaited our trip to teach our workshop and attend Google’s Pride Event, all while trying to collect our cool and not freak out. We tried. (I can’t guarantee that we succeeded.)

Our delayed flight finally arrived in NYC around 5am (just a *few* hours later than planned thanks to DIA shutting down for a thunderstorm!) but we were able to get some rest before waking up to teach our hand-lettering workshop to the folks at Google’s Creative Lab. We were given a tour and oogled at the 3D printers and laser cutters and free cafeteria and people who looked like they were doing really innovative things. We’ve never worked for a big corporation like Google, but it was just like the movies! We picked up our jaws from the floor, enjoyed our complimentary bubbly water and taught THE REAL, ACTUAL GOOGLE how to make REAL, ACTUAL hand-drawn letterforms!

The next day, we arrived at the Grow with Google NYC Learning Center for the big film debut and the Grow with Google NYC PRIDE Event! In attendance was Johanna Osburn, Senior Director of Development at The Lesbian, Gay, Bisexual & Transgender Community Center in New York City, who talked about The Center’s partnership with Google and the emergence of the Stonewall Forever virtual monument and documentary that was released this year. (If you haven’t checked out Stonewall Forever, you must! It’s so well done!) Finally the time came to start the film, with introductions by Mike Bufano, a Gaygler representative (a term lovingly adopted by Google’s LGBTQ employees). We watched the audience as they watched us (but not real us, screen us! So weird! If you think you hate the sound of your voice on a recording, just wait ’til its accompanied by a moving picture of your FACE!). The audience, mostly comprised of LGBTQ youth, community members and allies, enjoyed refreshments and continued their evening at a free Grow with Google workshop.

As I watched the crowd file into the adjoining room after the event, I wondered what kinds of stories those people held and if we’ll ever have the honor of hearing them one day. I wondered how the world will be changed by the next generation and how their stories might be affected by the ones we're telling today. I thought about what a wild ride this has been -all of it- and how grateful we are to now have this experience as part of the story we get to tell years from now.

Morgan and I exhaled.

We looked at each other and said “HOLY SHIT”.

And then we took a NAP. Ladyfingers Letterpress Announces its Employee of the Month